The City of Mount Vernon has established the area along College Way on both sides of I-5 between Fir Street and Hoag as general commercial and retail mall some of this area was initially developed in the 1970s and is poised for redevelopment by chain medium box and big box stores.

The primary light industrial and mixed commercial districts follow the main railroad line from Fir Street intersecting Riverside Drive, College Way, almost to Hoag Road. Included in this area is Parker Business Center which begins at Continental Place, east to Laventure Street between College Way and Roosevelt Avenue. Besides retail stores and small strip malls in this area, there has been a substantial increase in specialty medical and dental facilities with an ample land supply still available.

South of Mount Vernon from Blackburn Road to the city limits along I-5 a very large commercial/limited industrial zone has been established. A diverse group of businesses is taking advantage of the high visibility freeway exposure that ranges from equipment dealerships, building supply centers, manufactured home dealerships, and fuel services. The western portion of this zone fronts the railroad mainline. 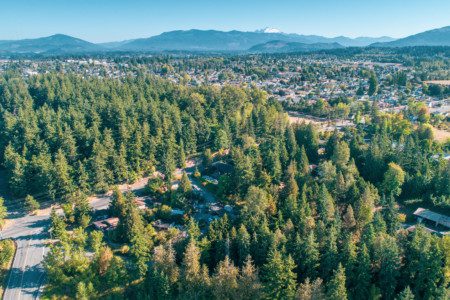 The Village at Riverside